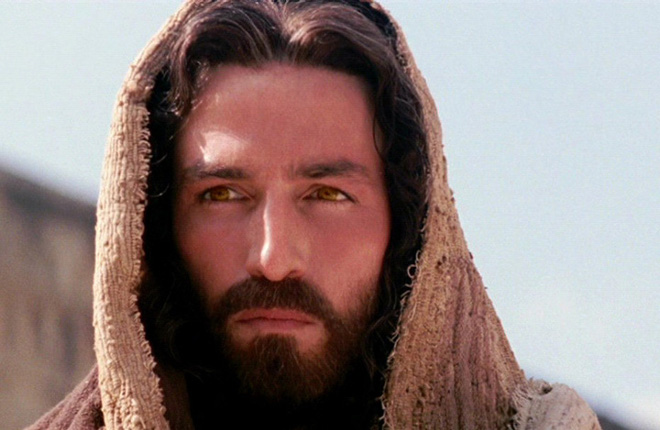 Today being Easter, I’ve decided it’s a good time to take a look back at The Passion of the Christ, Mel Gibson’s controversial depiction of the death and resurrection of Jesus Christ.

The Passion of the Christ is a fairly faithful re-enactment of the story as presented in the gospels of Matthew, Mark, Luke and John, although Gibson and fellow screenwriter Benedict Fitzgerald have embellished the narrative with scenes they have either culled from apocryphal sources or invented themselves.

As such, the film hits all the familiar beats you’d expect. Son of God Jesus (Jim Caviezel) is betrayed by Judas (Luca Lionello) and delivered into the hands of the jealous Jewish high priests. The majority of the high priests petition Roman governor Pontius Pilate (Hristo Shopov) to execute Jesus, and fearing an uprising by a populace who have been whipped into frenzy, Pilate acquiesces to their request.

Over the course of the harrowing hour and half of screen time that remains, Jesus is subjected to some of the most visceral cruelty ever committed to celluloid, highlighting both his outward humanity through every horrific wound he endures, and also his inner divinity, as we see him respond to his attackers with love and forgiveness at every turn.

A lot has been said about Gibson in the last decade or so, whether it be about his work as a director or the trainwreck that is his personal life, but there’s no escaping one simple truth: the man is a born storyteller.

Matt Stone and Trey Parker brilliantly summed up this conflict between Gibson the man versus Gibson the artist in their “Imaginationland” episode of South Park:

“Say what you will about Mel Gibson, but the son of a bitch knows story structure.”

The Passion of the Christ finds Mel on top form, and his command of structure is evident in the skillful job he does of balancing the story of Christ’s final hours with flashbacks to earlier in his life that offer respite from the extreme violence of Jesus’ punishment and often work to elegantly complement or contrast the events of the main narrative.

It’s not just Gibson who is on song for this one; as Jesus, Caviezel gives a career best performance, creating the most human version of Jesus that I’ve ever seen in a movie. His Christ possesses a full range of emotions, and is capable of being warm, playful, sad, brave, scared and angry.

Portraying a character who is equal parts God and Man can’t have been easy, however Caviezel hits on a perfect blend of someone who is quietly driven by a sense of purpose, but also deeply troubled by the terrible sacrifice that he knows awaits him.

The performances by the rest of the cast fall more into the “serviceable” category, with the only other stand outs being Shopov as a conflicted Pilate, Rosalinda Celentano as a creepy, androgynous Satan, and Maia Morgenstern as Jesus’ anguished mother, Mary (who looks strangely close in age to her son, but whatever).

If the performances are more often decent than outstanding, the same cannot be said for the The Passion of the Christ’s visuals. This is a beautifully shot film, managing to paradoxically achieve a painterly quality whilst feeling “real” at the same time.

Gibson’s risky decision to have the characters speak only in subtitled Aramaic, Hebrew and Latin further enhances this sense of reality. This stylistic choice immerses the audience in the world of the story more fully than would have been possible if the actors were speaking in stilted English or Mid-Atlantic accents, and grounds proceedings with a sense of reality (even if the dialects spoken aren’t quite accurate to the time period and region featured in the film).

On the subject of the film’s sound mix, the sound effects are all handled well, and the sound of everything from nails piercing flesh to a single drop of rain hitting the earth is expertly brought to life. The score is not quite as effective as the foley work, but it is still a solid effort by John Debney, especially the final track, which does well to capture the sense of hope and triumph crucial to that point in the story.

In terms of the visual effects, these mostly go unnoticed (which all good VFX should do), and are only really apparent in major sequences such as during an earthquake towards the end of the movie. The make-up crew are the real stars in this regard, and their prosthetics are grotesquely well designed and applied.

My only real issue with the make-up is that the wounds added to Caviezel’s body after Christ is whipped seem too severe for anyone (even the Son of God) to have withstood long enough to be crucified, and it feels like Jesus should have bled out by the halfway mark!

Having heaped praise on what the filmmakers have done well, now is probably a good time to address the two main criticisms that dogged the film when it was originally released in 2004: allegations of anti-Semitism, and accusations that the level of violence was too intense.

First up, let’s look at the charges of anti-Semitism. To be honest, I think there’s some substance to these claims, in that there are plenty of negative depictions of Jewish characters throughout the film, and the story adheres closely to the idea that Jesus was brought down by a group of powerful Jewish leaders.

That said, I’m not entirely convinced that this content was intended to be anti-Semetic; I think it more comes down to Gibson’s storytelling sensibilities leaning towards the simplistic, so that the “good guys” are all attractive and noble, while the “bad guys” are presented as ugly and petty, and this includes Jews and Romans alike.

The Passion of the Christ also includes several instances of Jewish characters being portrayed in a positive light (even some of the high priests argue in Jesus’ favour, for example), and despite the subsequent unpleasant comments by Gibson towards Jewish people during his famous DUI arrest, I generally accept his argument that the film is meant to be about all of humanity, rather than an attack on one specific racial group (although I’m probably being very naive here).

As to concerns over the amount of violence in the movie, I have to say that this is a completely valid criticism. The graphic brutality showcased in this film is extreme to the point of being difficult to watch, and rather than adding to the emotional power of the film, the near-relentless assault makes you quite numb to it all by the end.

It’s at these moments that the flashback sequences, which (as mentioned earlier) cut away to the non-violent moments in Jesus’ life, are the only thing that keep you hanging in there.

These scenes also provide some of the better creative flourishes in the film, as Gibson does a wonderful job of juxtaposing events in the past with the horror of what is occurring in the narrative’s present.

Of these, the best include when Christ’s jubilant entry into Jerusalem on Palm Sunday is contrasted with his cruel exit from the city on Good Friday, and even better, when the Crucifixion is intercut with the Sermon on the Mount and the Last Supper.

But in the end, Gibson’s fixation on the violent aspects of the Passion story is kind of a problem, for the same reason that obsessing over the Crucifixion at the expense of what follows is an unhealthy way to approach the Christian faith in real life.

As a former Catholic now pretty firmly committed to atheism (that’s actually drastically over-simplifying my beliefs, but we honestly don’t have the time for me to get into it…), I’m probably the last person who should be doling out lectures regarding religious belief, but it seems to me that the best reading of the New Testament story of Jesus focuses on the importance of love and forgiveness, and places emphasis on humanity’s potentially bright future.

Yes, Jesus goes through a terrible ordeal and commits a huge sacrifice on humankind’s behalf, but it’s the outcome of that sacrifice that’s supposed to be what matters.

By offering himself up in place of humanity as a primal blood sacrifice designed to atone for our sins, Jesus is wiping the slate clean, and letting humanity start afresh, free from the (Original) sins of the past and able to move forward towards a better future.

In choosing to dwell more on the sacrifice itself, rather than the meaning of that sacrifice, Gibson almost loses the meaning of the Passion story entirely, and it’s only in the last few moments of the film that he manages to give the story the uplifting feeling it so desperately needs to close out on.

Still, even if The Passion of the Christ is a needlessly gory affair, it’s also an undeniably powerful cinematic experience for the faithful and unconverted alike.

Ultimately, it’s hard not to be inspired by the story of a man who believes that he has to die for the good of the world, who willingly walks to this death and responds to his subsequent humiliation and torture without a single hateful word or action, even for a staunch heathen like me.