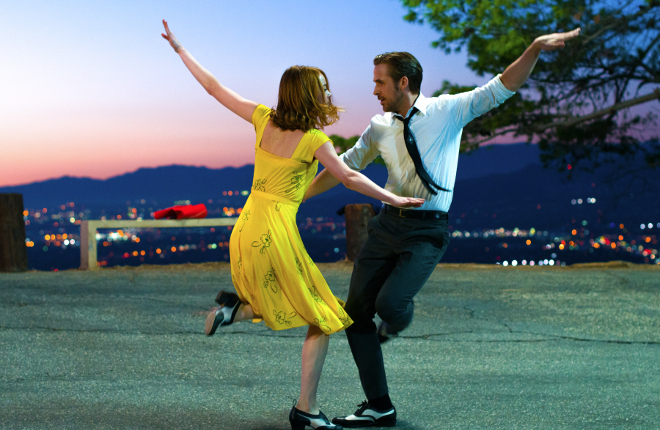 It’s becoming something of a dubious tradition for me to post outrageously postponed reviews in January, a custom only further perpetuated by the decidedly late arrival of this look at La La Land.

Now as then, the reason for this delay isn’t procrastination (well, the main reason anyway…), but rather it comes as the result of me mulling over my initial, complex reactions to what I had seen.

Because for all that Damien Chazelle’s musical has wowed audiences and critics alike – just this week it received a record-equaling 14 Oscar nominations – I have to admit that I had (and still have) mixed feelings on La La Land, even as I can’t deny the incredible craft that lies at the heart of the film.

As the name suggests, La La Land takes place in Los Angeles, and introduces us to Mia (Emma Stone), a would-be actress perpetually – and humiliatingly – overlooked, and Sebastian (Ryan Gosling), a jazz pianist struggling for work due to his purist ideals.

After several false starts, the pair soon find themselves bonding over their creative passion and frustrations, and before you can say “romantic musical number”, they’ve fallen in love.

But as the pressure involved with following their dreams begins to take its toll, Mia and Sebastian soon realise that doing what they love might make staying together an impossibility…

As you’ve no doubt already heard, La La Land is a love letter to classic Hollywood films, with an emphasis on musicals, including the Greatest Of All Time, Singin’ in the Rain.

Whilst it’s still super accessible to casual moviegoers, La La Land is also a movie made by people who love cinema that appeals most to people who love cinema – in short, critics and filmmakers – and that’s no doubt a major reason why it’s generated so much positive buzz, despite having (in my opinion) several shortcomings.

WHAT TO LOVE ABOUT IT

But first, the good stuff.

Chazelle’s direction is fantastic; not only does he draw strong performances out of Stone and Gosling, he – along with cinematographer Linus Sandgren – also delivers the prettiest film you’ll see all year, one that embraces a refreshingly bold colour palette that somehow never seems too much.

These visuals are helped immeasurably by the outstanding choreography by Mandy Moore, which perfectly captures the energy of the vintage musicals that La La Land seeks to emulate. If the opening number – set amid a traffic jam, no less! – seems a bit too much, later moments, including a romantic dance among the stars, are suitably breathtaking.

Circling back to Stone and Gosling, whilst neither can be considered professional singers or dancers, both have clearly worked tremendously hard to develop their skills in both areas, and each turns in a creditable vocal and physical performance (although compare the vocals of either to supporting player – and real life musician – John Legend, and you’ll instantly be reminded that there are “singers” and there are “Singers”…).

But of course, the real star in a flick like this is the music, and it’s here that La La Land truly soars. Not only are the melodies by composer Justin Hurwitz insanely catchy (I defy you not to hum them incessantly, post-viewing), the lyrics by duo Pasek and Paul effectively capture the spirit of each scene, and elegantly express the emotions of the characters.

WAIT – HOW ISN’T THIS THE PERFECT MOVIE?

So where does it all go wrong? Well, basically, La La Land falls down in the story department.

And yet for such a lean narrative, it still manages to drag during the middle act – disappointing, considering how masterfully editor Tom Cross has cut much of the rest of the film – and moreover, it seems a little muddled in terms of what it’s actually trying to say.

See, my reading of La La Land – and I’ll be the first to admit this could be wrong – is that not only is it a story about following your dreams, it’s also about the need to move on from the past in order to create the future.

This is expressed most obviously when Sebastian’s refusal to compromise when it comes to his views on modern jazz – which he sees as a betrayal of the original artform – leads to a confrontation with Legend’s Keith, who opines:

“How are you gonna be a revolutionary if you’re such a traditionalist? You hold onto the past, but jazz is about the future.”

And of course, he’s right – yet La La Land still manages to present Keith as a sell-out, or at the very least, Sebastian’s eventual return to his original dream of managing a traditionalist jazz club is shown as the correct move, even though he ends up splitting with Mia.

Mia also has to let go of her past failures in order to find the strength to ultimately achieve her dream of becoming a successful actress, and whilst this is portrayed in a positive light, the price she pays for embracing her future is that she loses Sebastian as a result.

And then on top of it all, there’s the very nature of the movie itself: a tribute to a bygone era that, save for a few novel flourishes – including an admittedly brilliant bittersweet finale that teases what might have been for our couple (itself arguably inspired by An American in Paris) – is clearly utterly enraptured with the history.

All of which leaves me a bit confused. Just what is the message at the heart of La La Land?

I mean, for all that Chazelle seems to be advocating drawing from the past to create something new and better, much like Sebastian, he seems more fixated on rehashing older movies under the guise of doing something new (which is kinda one of pop culture’s biggest problems right now, but I digress…), which flies in the face of my reading of the film’s key takeaway.

So if La La Land isn’t about moving on from the past, and it isn’t exactly about hanging onto it either, then what IS the movie about? Both? Neither?

Frankly, I’d really like to like the movie more, so if anyone can shed some extra light on it, I’m all ears!

On a purely technical level, La La Land is an astonishing piece of cinema. Those going in looking for moving performances, top notch staging and a borderline addictive soundtrack will leave utterly satisfied, as no doubt will those film buffs who pick up on its many nods to the films of yesterday.

That said, anyone interested in looking beneath the surface of La La Land’s story may come away feeling a little confused as to just what the film is trying to say, which could in turn leave them convinced that this year’s critical darling is at least a little over-hyped.