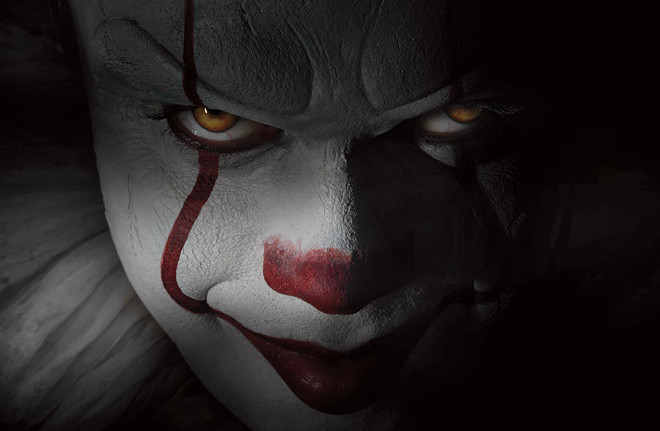 It’s not that I have full-blown coulrophobia or anything – your average, garden-variety jokester doesn’t bother me one bit – but the evil clown archetype really does unsettle me, which has always proven a bit of a problem, given how much of a pop culture staple it has become.

The recent global phenomenon of creepy clown sightings has only compounded my woes, so on the eve of the Halloween weekend – when I’m almost certain to come face-to-grease painted face with one of these monsters – I’ve decided to confront my fears and try to figure out just why it is that these characters designed to amuse children are able to chill the blood of fully grown adults.

A lot of what you’re about to read comes from research and opinion by experts that I’ve meticulously pulled together (Read: gleaned from Wikipedia). But before we get to that, I’d like to share my own personal theory about why creepy clowns scare us, both in real life and in pop culture.

See, there more I think about, the more I’ve come around to the idea that there’s something inherently unnerving about taking a concept that’s meant to be innocent – in this case, harmless characters designed to make kids laugh – and tweaking juuuuust enough that it becomes sinister

Why is this so powerful?

Well, partly because it makes us confront the possibility that many of the things we dismiss as harmless might actually conceal something menacing, and partly because it suggests a threat to childhood – and by extension, children – which to most people is the worst scenario imaginable.

Of course, this is just my armchair theorising, and whilst I think it’s a credible theory, it’s probably best if we push on to cover views that are just a LITTLE bit more legitimate…

One of the more interesting conjectures to come out of recent research into coulrophobia is that the root cause of a fear of clowns is down to the so-called “Uncanny Valley” effect.

This is defined as when:

Obviously, clowns (even benign ones) tend to fit this bill, what with their oversized hands and feet and distorted facial features.

So basically, if clowns just generally give you the creeps, its probably for the exact same reason that CGI Tom Hanks weirded you out in The Polar Express: you’re being confronted by something close to – but not exactly the same as – a normal person, and the resulting disparity is unsettling.

Layer on top a few supernatural powers and bloodthirsty tendencies as is common with the evil clown archetype, and the outcome is a pretty good recipe for freaking out anybody, regardless of any existing phobias they might suffer from.

And speaking of bloodthirsty…

What if the terror we feel when we see a creepy clown in pop culture (or out on the street) doesn’t come from our imaginations? What if it comes from the knowledge that clowns have committed actual murders in real life?

There’s been at least one famous “true crime” example of a killer clown within the last 40 years: notorious serial killer John Wayne Gacy.

I won’t go into too much detail regarding Gacy’s crimes; suffice it to say, it was pretty sick stuff.

Indeed, the nature of the crimes, coupled with Gacy’s “Pogo the Clown” persona, shocked both America and the world to the extent I’m certain that it filtered down into the collective consciousness.

The upshot of this was that it influenced those who crafted the pop culture in the years since these crimes happened (and I’m not just counting those films actually about Gacy), which might just explain why pop culture has more creepy clowns now than ever…

If all else fails, blame Stephen King

When all is said and done, it’s entirely possible that I could be over-thinking all of this; in the end, the reason why creepy clowns spook us could be down to the simple fact that pop culture has been traumatising us with them for years.

For starters, there’s Batman’s archnemesis The Joker, who has been terrorising generations of fans from his first appearance back in 1940 through to the modern era, with Heath Ledger’s iconic and chilling portrayal in The Dark Knight a particularly noteworthy recent example.

There’s also WWE wrestler Doink the Clown, a malicious character whose cruel pranks allow him to stand out even amongst his decidedly over-the-top peers.

But undoubtedly the best-known evil clown in all of fiction is Pennywise the Dancing Clown, one of the chief forms assumed by the demonic shapeshifter at the heart of Stephen King’s 1986 novel IT.

Pennywise was infamously brought to life by Tim Curry in the 1990 TV movie adaptation of King’s novel, and for most pop culture fans, Curry’s performance remains absolutely terrifying even to this day.

It doesn’t hurt that many of us (including yours truly) caught our first glimpse of IT at far too early an age, leaving it forever etched in our nightmares (a nightmare soon to be relived thanks to the upcoming remake starring Bill Skarsgård in the title role).

Thanks to Pennywise, it seems like Hollywood finally realised the true potential for horror lurking under the surface of the painted smile and red nose of every clown – what else could explain the plethora of films starring haunting harlequins that followed, with 2014’s Clown only the most recent instance?

Heck, with so many creepy clowns on the loose in pop culture, it’s no wonder people freak out when they encounter one in real life!

So why do clowns creep us out?

After all this speculation, am I prepared to lay the blame for our fear of fictional and flesh-and-blood clowns at the feet of any of the above factors?

To be honest, I think all of these arguments have some merit to them, and the ultimate culprit is likely a combination of several factors present to differing degrees across each individual person the world over.

Whilst some people might have a big thing about the “Uncanny Valley” and vivid memories of the Gacy murders, others might find themselves predominantly tormented by the sharp teeth of Pennywise and the subconscious horror of an innocent concept turned very, very bad.

Whatever the reason, all that matters is that they DO freak us out, so if it’s all the same to you, I won’t be venturing outside again until the current creepy clown craze is over and done with!

That’s all from me – now it’s over to you! Which pop culture clown scares you the most? What is it about them that terrifies you the most? Let me know in the comments below or on Twitter or Facebook!